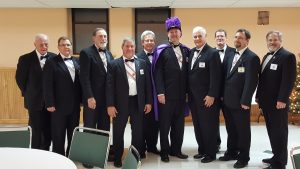 The Honor and Color Guard are made up exclusively of Knights of the Fourth Degree.  Dressed in dark blue blazers and berets, the Honor Guard attends events at the invitation of the Archbishop and our pastors, as well as visitations and Masses for our deceased brother Knights, in addition to special events upon request.

The Honor Guard is the most visible arm of the Knights as they are often seen in parades and other local events wearing their uniforms, while the Color Corps is utilized for the presentation of the flags.

Official dress for the Honor Guard and Color Corps is a Navy blue Blazer with the Fourth Degree emblem crest and Knights of Columbus emblem of the Order buttons, gray trousers, official Fourth Degree necktie, black beret with a Fourth Degree metal badge, white dress shirt, and white gloves and black shoes and sox.  Baldrics are worn from the right shoulder to left hip and are color specific by nation.  In the United States, baldrics are red, white and blue and a service baldrics include a holster for a sword and are worn over the coat while social baldrics are worn under the coat.  Faithful Navigators and Past Faithful Navigators are permitted to carry a white handled silver sword.  Masters and Vice Supreme Masters, as well as Former Masters and Former Vice Supreme Masters, are also denoted by their gold swords.  A colored background patch is worn under the Fourth Degree badge on the beret to denote an office held within the degree and are listed below.